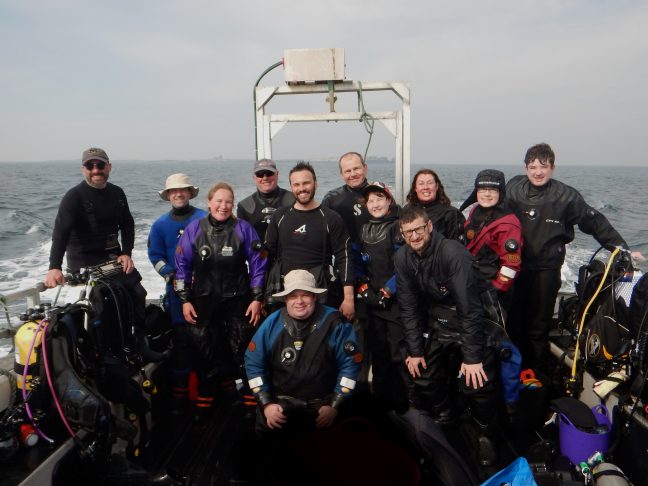 Bank Holiday Monday – never good for traffic, and this day was no exception. The temperature on leaving home was 25oC. However, as we slowly eeeeked our way up the A1, the temperature begun to drop. Almost 2 hours later when we arrived in Seahouses, the temperature was only 15oC, much better for wearing a dry suit. We all kitted up and headed on to Glad Tidings VII, with Michael as our skipper. A merry band of 12 Tyneside 114 members, all to try out the new trail.

The first dive was on North Wamseys, where Hanna did her Ocean Diver qualifying dive with Si Fish. The visibility was about 5 metres, with lots of marine life including a reluctant octopus. The second dive, after a shorter than normal surface interval (due to potential incoming fog, that didn’t arrive in the end) was on Gun Rocks.

We actually dived the site on slack which was great. Each buddy pair was given a map so that they could see that the trail was not circular, but fanned out in three directions from the central pile of three. Everyone was able to navigate around, and for some it was the first time they had actually seen the cannon (including some who had done the site before!). The visibility was about 5 metres which was great.

I was diving with Sue, so used her as a model, taking lots of photos for future publicity. We also took advantage of the slack to swim over a larger area than the trail. It is really evident towards the eastern end of the rock, how the storms have ripped up all of the kelp. There is just now a large pebble bed. Back on the other side of the trail, to the west, the kelp is fully intact and the short walls into the sound are still covered with life such as dead man’s fingers. We also took the opportunity to find the cannon which Si found last year, and to take some more photographs of it.

All of the photographs which I took, have been added to the Gallery section of this website. If anyone reading this post, has photos which they would like me to add, then please let me know – you can use the contact form, or my email if you have it.

The feedback from everyone was good. It seems that finally we may have a working dive trail, which will allow people to actually see the cannon in all of their glory. The maps will be updated and information put on the back about the cannon and the site in general. Once produced it can then be downloaded from the dive trail section of this website, for use in the field. In the meantime, the draft map can be downloaded here.