In 2013 Wessex Archaeology (WA) was commissioned by Historic England to undertake an Undesignated Site Assessment, of the wreck of the Gun Rocks wreck site. The fieldwork was part of a staged investigation of a number of wreck sites in the Farne Islands. The diving project on the Gun Rocks site took place between 28th August and 5th September 2013 . As part of the diving investigation WA used the relatively new technique of photogrammetry in order to document the cannon on the site. Below are some of the findings from that report, as well as some of the photogrammetry images which we as a project have generated since. 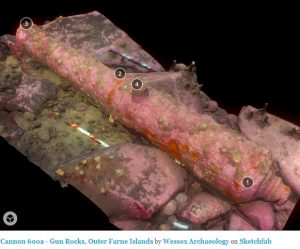 WA used a software programme called Agisoft Photoscan, to generate some of the 3D models of the cannon. They really are worth having a look at and can be found by clicking on the picture. This takes you to their blog page which has a number of different cannon on it all from the Gun Rocks site. You can then rotate and zoom in and out of the image by using your mouse or touch screen.

It is really cleaver technology which we hope to continue to use in order to document the remaining cannon on the site. But as you can imagine it takes a lot of photographs in good conditions to generate the images. You also need a copy of the software and some good computing power in order to stitch them all together. These models can be viewed through the free online site  Sketchfab.

So during the year we have been working on getting the photogrammetry done, as a dive club, hoping to document all of the cannon so that we can use the models for further mapping, but also so that they can be used for publicity. Also it is easier to take the models to a conference, rather than to take an expert in ordnance to the cannon. So far our work has yielded the following models – but do note that these are very much work in progress. As the series progresses, the models do improve! Scroll down to the bottom of the page for a video of one of the models too.

If you are wondering what the numbers refer to, they are the original numbers from the WA report, so have been kept for continuity. With regards to location of the cannon, our new updated map below, drawn in June 2017, after we resurveyed the cannon alignment locates each cannon by number.

In addition to the models which have been shown as photographs above, a film of cannon 6008 has also been made: