Tyneside 114 has had an involvement with Gun Rocks since the late 1960s, when research and exploration on this site began. As a result of the investigations into this cannon site, over the last 45 years a number of reports have been written. This page provides links to those reports, so that they can be down loaded and read at your leisure.

The five reports written to date are listed below. 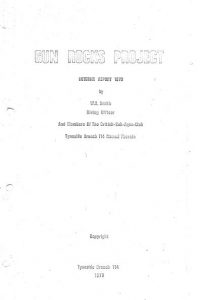 Tyneside 114’s association with the cannon on Gun Rocks began back in 1970 thanks to the curiosity of the Diving Officer of the time, Mr. W.R. Smith (known as Bill). He had been reading a book by a well-known historian which gave an interesting account of the battles and the epic voyage by the defeated Spanish Armada around Britain and Ireland.

During this time, he also read with interest an article about the finding of a cannon on the Farne Islands. This was the start of the Gun Rocks project. During the project in the 1970s, a cannon was raised, a TV programme made and a huge amount of diver participation was involved in the surveying of the cannon site. All of the findings were recorded in the Gun Rocks Project, Interim Report 1970, written by Bill Smith. 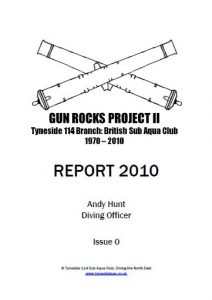 In 2010 Andy Hunt, the Diving Officer of Tyneside 114 at the time, started a Gun Rocks Project II to celebrate the 40th anniversary of the initial project. The aims of this project were:

One of the secondary aims was to identify the name of the wreck.

Following the Gun Rocks Project II, in 2013 Wessex Archaeology (WA) was commissioned by Historic England (previously English Heritage) to undertake an “Undesignated Site Assessment” of the wreck on the Gun Rocks site. The work was undertaken as part of the “Heritage at Risk – Designated Wrecks at Risk”.

The fieldwork was part of a staged investigation of a number of wreck sites in the Farne Islands, beginning in March 2013. The Gun Rocks site was dived between the 28th August and 5th September 2013 and included 14 dives, undertaken by both WA divers and Tyneside 114 divers.

A report was subsequently produced by WA, which has an interesting conclusion as to the reason for the wreck and its potential origins. 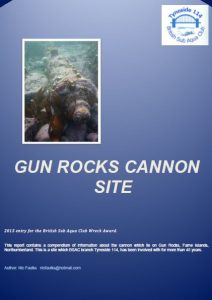 This report was written in order to summarise all of the work which has taken pace on Gun Rocks to date (2015). It includes the following chapters:

Although the report summarises all of the research undertaken between 1969 and 2015, the final chapter has spurred on further research and the installation of a dive trail. In fact, this website has resulted from the enthusiasm created from the 2015 report! 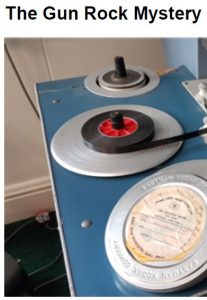 Joe Mallon a former member of Tyneside 114, but still in touch with our members, has been continuing his research in to the mystery of Gun Rock. He has been very active, chasing up footage from the North East Film Archive, as well as historical maps of the Farne Islands, to find out when Gun Rock got its name.

In 2017 he have brought his research together into one report and it makes for a really interesting and informative read.  The report contains numerous news paper cuttings and copies of maps and comes to some interesting conclusions…..  The 2017 report has now been updated. The latest version is available by clicking on the image, and includes a photograph of what the wrecked ship may have looked like.

Please read his report and let us know your thoughts. The conclusions are very plausible, but will the photogrammetry analysis of the cannon back them up?

The Summary Report was written so that it could be amended accordingly then submitted to each of the funding sources to provide them with information on how their funding was spent and what the tangible outcomes of the project have been. It is also intended as a stand-along report so that interested parties can find out what we have done during the funding period. The report has also been submitted for the 2018 Duke of Cambridge scuba prize.