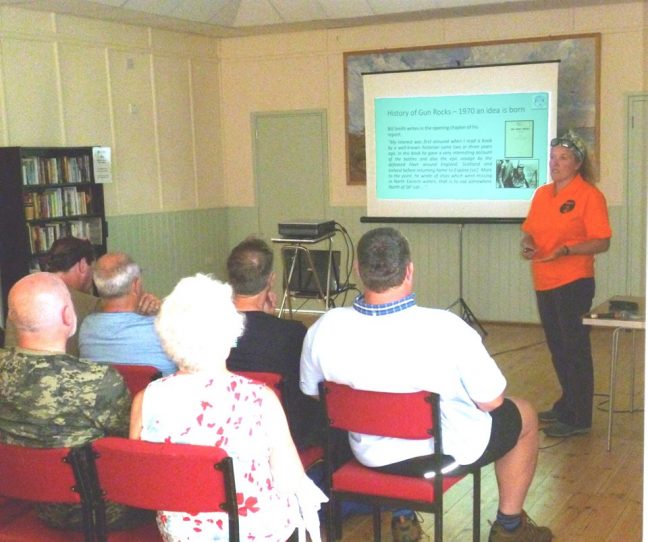 On Saturday 28th July, I was asked to give a talk about the Gun Rocks project and the dive trail, for the “Nor-Fest” Festival.

The weekend was wet and windy with a lot of dives cancelled in the morning, so we wondered how many people would turn up to this afternoon event; held in the WI hall in Beadnell. Luckily, about 70 divers came, which made for a great evening. First up was Tyneside BSAC 114’s very own Richard Booth, who gave a well illustrated talk about some of the wrecks off the north east coast. This was followed by tea and cakes, then my talk on Gun Rocks. Everyone seemed to listen, and even asked a few questions at the end…. more importantly i was approached by someone who said that they might have a sward hilt in their caravan, and if they can find it they will give it to me – fantastic, fingers crossed that they find it!

The following two talks were very different to each other, and no less interesting. One on the deeper wrecks of the east coast of Scotland – by Steve Sanders. he also brought with him a deep sea divers helmet which he had found on one of his dives; quite something. The final talk was given by Ben Burville and was all about seals and their behaviour. it was illustrated with lots of videos he had taken on and around the Farne Islands….

The final bit of news – we have the finalised laminated dive trail maps, so if you would like one, then do let me know. You can contact me through the contact form on this website. Happy diving! 🙂